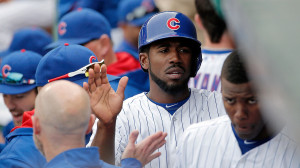 After reports originally stated that Dexter Fowler was intending on signing a three-year pact with the Baltimore Orioles, he decided to return to Chicago on a one-year deal.

We currently live in a digital age, one capable of producing quick news reports, yet questions regarding validity and dependability of news sources may frequent from time to time. The advanced media does not simply stick to the facts, but adds their own forms of speculation and intrigue. Disciples of Major League Baseball were able to witness this catastrophe just a few days ago. It was originally reported that Dexter Fowler had reached a three-year contract with the Baltimore Orioles totaling thirty-five million dollars. At the time, it seemed realistic for the team to acquire Fowler, considering their gaping hole at the top of their batting order, as well as the team’s dire need for a corner outfielder. As the story made headlines, we waited patiently to hear the confirmation from general manager Dan Duquette and company. Unfortunately for the Orioles and their fan base, that jubilant news never occurred. Instead, Fowler weighed his options carefully. Although he would make an excellent salary with the O’s, he knew that the Cubs were ready to win a World Series Championship. After days of contemplating this decision, Fowler made the correct choice, signing a one-year, eight million dollar deal to bring him back to the North Side. Unfortunately, Chris Coghlan fans are disappointed, as he was dealt to the A’s for a minor league pitcher. Although he was an above-average player and fan favorite, his disposal was integral to the Fowler signing. Now that Fowler will be donning Cubbie Blue in 2016, what can we expect out of him? Consistency is the number one aspect of Fowler’s mantra, meaning that another 150-game, 100-run campaign is an extreme possibility, especially when considering the fact that he will perform as the lead-off hitter once again. Keep in mind that this is a contract year for Fowler,  so his performance during the season will correlate to a mega-contract in the future if he can prove his worth. For the Cubs, and their chances of possessing a dynamic number one hitter, they will need to hope for the second-half edition of Dexter Fowler. His splits from first-half to second-half in 2015 are simply astonishing, as he increased his batting average by forty points, on-base percentage by eighty-one points, and his overall OPS (On-Base plus Slugging) by a whopping 175 points. Fowler struggled early on, which is acceptable considering that he was forced to adapt to an everyday role, which is a task he has never been able to accomplish. Statistics prove, however, that Fowler is able to function as a credible offensive threat. Another noticeable problem for Fowler is his poor output against right-handed pitching. He hit a meager .228 against right-handed pitching in 2015, compared to an impressive .328 against left-handed pitching. If he is able to buckle down, and post an average in the .250 neighborhood against right-handers, we could witness a drastic improvement in his overall batting average. This will lead to better at-bats at the plate, and a higher rate of run production for an offensive-minded Cubs team. Although certain statistical aspects of Fowler’s game could use some refining, his clubhouse ethics and desire to win make him a hot commodity. Fowler understands his role as a lead-off hitter, which is to get on base, thus giving the team a chance to score a run in the early moments of a game. He does not look to hit sky-high home runs; instead he looks for base-hit opportunities. Fowler is a coachable player, who does not let his ego control his gameplay. His number one goal is to benefit the team in any way possible, and that mindset builds championship contenders. With a highly-anticipated 2016 to come, Dexter Fowler will step up when the game is on the line. He will also help propel the Cubs to a World Series appearance, or dare I say, championship. Welcome back, Dexter!

Adam LaRoche Is True To Family

Sat Mar 26 , 2016
Bringing a son to a Major League Baseball game is arguably the most American undertaking a father can achieve. Viewing baseball has been a family affair in years past, as players themselves insist on leading their own sons and daughters to the ballpark. Ken Griffey Sr. allowed his son to […]